Every year each Small Group Ministry group is supposed to do a “Service Project” that serves either the MLUC community or the public at large. Our small group started to think what project we might undertake. At the time, our group consisted of the following members: Jean Gaul and Linda Farr co-facilitators, Greg Gaul, Craig Farr, Steve McReynolds, Ingrid Deckman, Sue Drummond, Nina Selsor, Alan Silverman, Lee Dastur, Marian Caroselli and John Mason.

Greg said that he would like the project to have something to do with the spiritual health and well-being of the church — rather than just a one-time event.

Linda’s Presentation:
And that Jed Linda to propose an idea. But Linda, why don’t you take up the story and tell us about your idea.

The group thought that sounded like a good idea. Linda related when back in the early 1990’s the church had fairly large women’s retreats, and at one particular retreat former member, Martha Chabinsky, set up a labyrinth for us to walk in the woods. Linda thought it was really special, and since then has always sought out labyrinths. It was recalled by a number of our group that there had been some discussion during the fundraising Capital Campaign of a possible labyrinth but that it might be too expensive. So started the concept of our SGM building a labyrinth in the open space behind the church.

Craig and Alan looked into what tools and other things we would need and the possible cost. We also considered where we might place the labyrinth, how we could ensure that the space could be used for other activities, and be low maintenance for the grounds crew, and how to design it so that a number of people could use it at the same time.

Greg and I looked at various labyrinth designs. We decided that the Baltic design was appealing as it has a back door exit so that people walking the path can exit without having to walk the same path out as other people are still walking. Greg then graphed the layout and how it could be transferred from our paper printout to the actual ground. On June 15th Greg and I arrived at MLUC to stake out the path. It was a lovely spring day. We used small stakes, string and spray chalk to lay out the grid on the ground a combination of artistry and math and amazingly, we were still married at the end of the day! 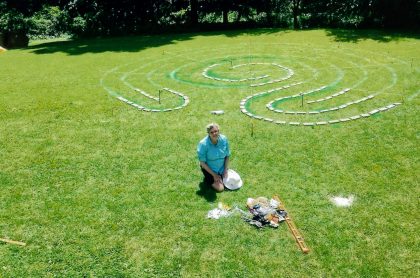 The pavers were delivered during the middle of the nursery school dismissal which caused some confusion as well as fun for the kids who got to see the forklift in action. And then, the next day, Saturday, June 16th the construction was started and completed! When we discussed the labyrinth with the Sunday morning Meditation Group, Terry Dixon expressed great interest in the project as he had long been a devotee of labyrinths. So he joined the SGM in the digging and construction. One group used edging tools and shovels to dig along the chalked outlines. Another group rolled up four inch wide strips of sod. After the strips were removed, another group shook off any excess dirt and added the soil to a sand mixture while another group found places for the leftover sod to be placed. Yet another group used the sand/dirt mixture to level out 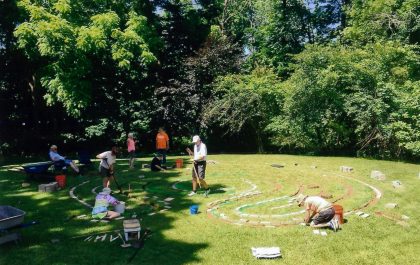 the small trenches so that the team laying the pavers could make sure they were even with the surface. The extra sand/dirt mixture was used to fill in around the pavers. People rotated from one group to another as their energy peeked and faded. It was a long day as the sun came out and it got hotter. But in the end, the labyrinth was finished and an exhausted crew collapsed and rejoiced at what we had accomplished!

Our hope is that the labyrinth will be an added area for spiritual exploration by the entire church. 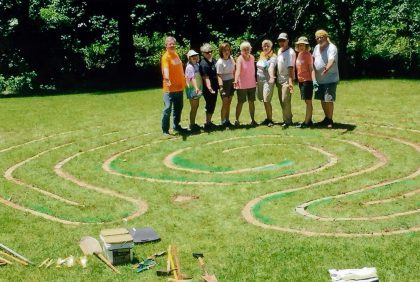